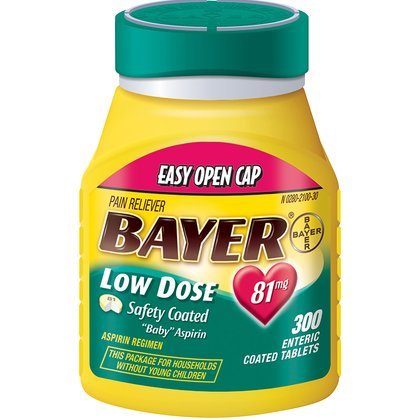 This article is from Mercola.com (link to full article found here)

If you haven’t had a heart attack, step away from the aspirin bottle… If you are one of the 40 million Americans who take an aspirin every day, you may want to heed the latest warning from the US Food and Drug Administration (FDA).

After many decades of promoting aspirin, the FDA now says that if you have not experienced a heart problem, you should not be taking a daily aspirin—even if you have a family history of heart disease.

This represents a significant departure from FDA’s prior position on aspirin for the prevention of heart attacks.   On its website, the FDA now says:

“FDA has concluded that the data do not support the use of aspirin as a preventive medication by people who have not had a heart attack, stroke or cardiovascular problems, a use that is called ‘primary prevention.’ In such people, the benefit has not been established but risks — such as dangerous bleeding into the brain or stomach — are still present.”

Their announcement was prompted by Bayer’s request to change its aspirin label to indicate it can help prevent heart attacks in healthy individuals. Aspirin generated $1.27 billion in sales for Bayer last year, and from Bayer’s request, it appears they want everyone to be taking their drug.

But the FDA says “not so fast”—and rightly so. Evidence in support of using aspirin preventatively has gone from weak to weaker to nonexistent. This is why I’ve been advising against it for more than a decade. It looks as though aspirin, even “low-dose aspirin” (LDA), may do far more harm than good.

In fact, it is debatable whether or not aspirin has ANY protective benefits against cardiovascular disease, even if you have suffered a heart attack or stroke. Recent scientific studies have uncovered a number of serious side effects, suggesting that whatever aspirin may offer may be overshadowed by its risks, especially when safer natural alternatives exist.

Read the rest of the article here:  “FDA Reverses Its Position on Daily Aspirin“