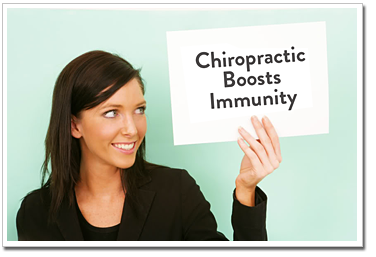 In 1975, Ronald Pero, Ph.D., chief of cancer prevention research at NYU, began researching the most scientifically valid ways to estimate individual risk of various chronic diseases. Pero’s team measured 107 individuals who had received long-term Chiropractic care (over 5 years). The chiropractic patients were shown to have a 200% greater immune competence than people who had not received chiropractic care! Interestingly, Pero found no decline with the various age groups in the study! This showed that the DNA repairing enzymes were just as present in long-term chiropractic senior groups as they were in the younger groups!

“Chiropractic may optimize whatever genetic abilities you have so that you can fully resist serious disease…I have never seen a group other than this show a 200% increase over normal patients.”

Those are pretty convincing words from a cancer researcher. Now, you may be thinking – that was in 1975! I will say this to you today…human anatomy has not changed in 40 years. The spine is still the spine and so is the immune system.

What HAS changed is the food we eat, environmental toxins we are exposed to, and the amount of mental stress most Americans experience daily. Have you ever wondered what steps you can take, other than getting adjusted (which we know optimizes your immunity), to help prevent cancer?

Next week (June 9th), I want to invite you to the “Cancer Killer” workshop here at Clearview. You and I can be armed with the things that really can improve our body’s ability to fight toxins and overcome chronic disease, especially cancer! Hood County is in the top 10 counties for cancer rates in the state of Texas, and that is NOT okay with me!  But, we CAN do something about it!  I hope you’ll join us next Tuesday at 5:30.