In honor of Veteran’s Day and what so many brave men & women have fought for since the days of the Revolutionary War, I want to share with you the flag that George Washington commissioned to fly over 6 of our very first Navy vessels in 1775 before we even officially became a nation and before the Stars & Stripes were ever flown. It is often called the “Pine Tree” flag or the “Appeal to Heaven” flag. I spent all weekend at a national conference geared at joining as a Nation Under God again and appealing to Heaven for God to redeem our nation and save America, to put us back on track again, and to restore us to blessing again. Psalm 33:12 says, “Blessed is the nation whose God is the LORD, whose people He has chosen as His inheritance.”

We were once so blessed as a nation because we were born out of an appeal to the God of Heaven for freedom. But, because we have believed lies and chosen foolishly to move further and further away from God and the truth, we now find ourselves in a very desperate situation. But, there is HOPE! There is time to repent and to turn back to Him! The Old Testament is full of examples where Israel turned away from God and He always restored them. There may indeed be days of difficulty ahead of us as a nation because of the evil we have sown, but God is a Redeemer! He loves to fix what is broken! That goes for America, and that goes for each of us personally. If you have broken places in your life or in your heart, there is hope! Appeal to Heaven! Jesus Christ is real. Jesus Christ is the only One who can save you.   He saved me and pulled my life out of so much destruction and hurt and stupidity, and I am standing here today to tell you that He is a God who delights to bring order to chaos and bring life out of death. You can be healed, you can be saved, you can be free through Jesus. AND our nation can be healed, our nation can be saved, and our nation can be set free again through Jesus. It is only by His power that anything good will come! Would you join us in believing God for restoration and appealing to Heaven for His mercy & healing?

There is a daily prayer movement that we can all join as Americans in praying for our nation. It’s called “Give Him 15”, you can download it anywhere you get apps for your phone. Commit to Appeal to Heaven for 15 minutes each day with us and see God do amazing things among us. If that’s overwhelming, then what if you committed to pray 2 minutes for 6 days a week and 3 minutes on Sunday, you’d pray 15 minutes per week for America! Either 15/day or 15/week is likely more time than most of us have been praying for God to intervene, right? Instead of talking about all the evil and all the problems, let’s stop spreading the news of what’s wrong and spread the news of what will be the solution…crying out to God! This world needs a strong America, full of hope – not in our own strength – but in the strength of God Almighty who so loves us and so loves the world that He gave us His Son! (John 3:16).  Twelve of our Presidents have quoted Matthew 7 when talking about America: “You are the light of the world.  A city set on a hill cannot be hidden.  Nor do people light a lamp and put it under a basket, but on a stand, and it gives light to all in the house.  In the same way, let your light sine before others, so that they may see your good works and give glory to your Father who is in heaven.” 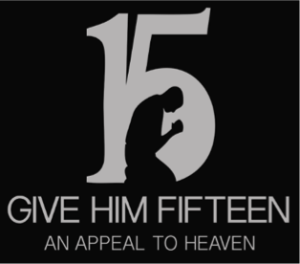