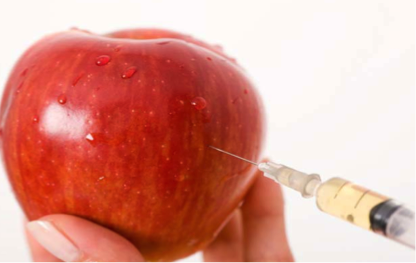 Spray pesticides on an apple and it’s no longer organic. Add a drop of oil to a glass of spring water and it’s no longer pure. Most Americans detest the idea of dumping chemicals in a pristine, natural environment. But why not have the same aversion when it comes to getting the flu shot?

Maybe it’s because you don’t realize what’s in it: Mercury (a known neurotoxin in the form of thimerisol), Glycol (a component in antifreeze) and Formaldehyde (the stuff they preserve cadavers with).  Up until 2014, every flu vaccine had aborted fetal tissue as an ingredient.  Thankfully because of much lobbying by Pro-Life advocates, the 2014-2015 flu shots no longer have that ingredient, but still contain a host of toxins.  Here is a 2014 list of vaccines that still do contain cells from aborted babies.

If you dumped any of those chemicals in your local water supply you’d get arrested. But every year, unknowing Americans line up at CVS to get this stuff injected into their veins, thinking it’s their best option to keep from getting sick…WRONG! Countless people get the flu from the shot itself, not to mention the long-term negative effects those toxic ingredients have on your body.

Given the choice to eat an organic apple vs. one blasted with toxic chemicals, you know which one you’d rather take a bite out of. The question is, would you take a bite out of yourself after getting injected with the ingredients in the flu shot? There are natural, alternative ways to boost your immune system and protect yourself from the flu. Vitamin C, Elderberry syrup/juice, Garlic, Echinacea Goldenseal, Vitamin D3, Garlic, Oregano essential oil, Probiotics, Exercise, & Getting Adjusted are all much better options!

Links to learn more about the flu shot decision:

Flu shot fantasies: How influenza vaccines halt flu infections (even when they don’t)

10 Reasons Why Flu Shots Are More Dangerous Than a Flu!